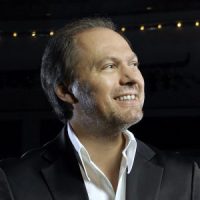 Music Director of the orchestra starting with the 2017-2018 season. Maestro Minczuk’s responsibilities will

Include conducting the orchestra, choosing the repertoire for the upcoming seasons, and shaping the artistic vision

of the New Mexico Philharmonic.

Roberto Minczuk conducted his first concert on October 14, 2017, where he will kicked off the season with

Mussorgsky’s Pictures at an Exhibition. “Maestro Minczuk’s appointment was the result of a rigorous process

which lasted two years and culminated with the 2016/17 season’s concerts, when each conductor was a finalist in the

search for the Music Director. The musicians of the orchestra, a special search committee comprised of

community members, musicians, and board members as well as the audience all arrived at the same

conclusion. Maestro Minczuk started a new era for the New Mexico Philharmonic, and it was with great

excitement that we welcoied him,” says Marian Tanau, Executive Director of the organization.

“I am thrilled and most honored to be the first Music Director of the New Mexico Philharmonic. Each rehearsal

and every concert we have performed together have been very powerful experiences of beautiful music-
making, and I look forward to this wonderful journey together!” Roberto Minczuk said.

Earlier in 2017, Minczuk was also appointed Music Director of the Theatro Municipal Orchestra of São Paulo. He is

Orquestra Sinfônica Brasileira in Rio de Janeiro. In Calgary, he completed a 10-year tenure as Music

Director, becoming the longest-running Music Director in the orchestra’s history.

Faust with the Theatro Municipal Orchestra of São Paulo; debuts with the Cincinnati Opera (Don Giovanni) and

the Tokyo Metropolitan Symphony Orchestra; and return engagements with the Orchestra National de Lille and

the New York City Ballet. In the 2016-2017 season, he made return visits to the Israel Symphony Orchestra, as

well as the Teatro Colón Philharmonic and Orchestra Estable of Buenos Aires.

A protégé and close colleague of the late Kurt Masur, Minczuk debuted with the New York Philharmonic in

1998, and by 2002 was Associate Conductor, having worked closely with both Kurt Masur and Lorin Maazel.

He has since conducted more than one hundred orchestras worldwide, including the New York, Los Angeles,

repertoire. His other recordings include Danzas Brasileiras, which features rare works by Brazilian composers

of the 20th century, and the Complete Symphonic Works of Antonio Carlos Jobim, which won a Latin Grammy

Please have any volunteer prospects visit www.vol4nmphil.org  and complete the process to become a full member of our Guild.

Have your recruit add your name at the bottom of the sign-up form to get credit!  Be the person who gathers the most new volunteers and you will win a great prize!  (to be awarded at our annual volunteer appreciation event in the Summer of 2022)